For this blog post, I am going to disagree with President Barack Obama. 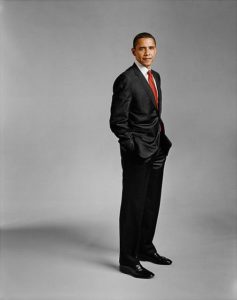 And here are a few examples of what he sounds like:

1) His visit to Comedians in Cars Getting Coffee (if you’re impatient, skip to the 05:40 mark).

2) His goof for the White House Correspondents’ Dinner (in particular, the 01:02 mark):

Barack Obama insists that he has “big ears.”

I feel like this is like a reverse The Emperor’s New Clothes. In the classic, the Emperor exclaims that his clothes make him look fantastic and nobody cares to point out that he should be embarrassed about being naked. In Obama, the leader of the free world describes how embarrassed he is about how he looks, and nobody cares to point out that the dude looks totally fine.

I looked up some stuff about ears. The average adult male ear is 6.4cm tall. Barack Obama is 6’1, or 185.4cm. In the photo above, I found Obama to be standing 514 pixels tall, while his right ear stands 18 pixels tall: 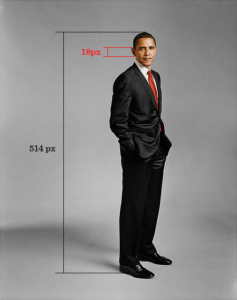 Wait, what’s going on? Why is this important? Who cares?

Well, Obama’s tricking you. You’re being actively deceived by the standing US President. Aren’t you offended? Shouldn’t we impeach him and send him to the Supreme Court, or ask for his birth certificate or his tax return? …Probably not.

Here’s the thing. Obama almost definitely knows he doesn’t have big ears. What makes this cool is that he sounds all humble and relatable, when really, he’s not conceding anything negative about himself at all. I mean, Jerry Seinfeld once ended a relationship with a girl for having big hands… among a litany of other obtuse reasons for break-ups… and I don’t even think he would dump a girl because her ears were too big.

There’s morals to this story about modesty and about self-conscience. Being modest and humble is nice. But if you’re going to self-deprecate, why attack your self-confidence in doing so? Might as well pick something that either you really don’t care about, or that totally doesn’t matter in the first place.